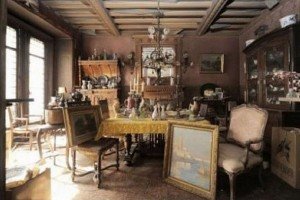 The bulk of the intact fore-edge paintings date to the late 19th and early 20th century and are found on reproductions of books published in the beginning of the 19th century.

Currently two British artists specialize in the fore-edge art form: Martin Frost and Clare Brooksbank. Consider checking out the reference book of L. Jeff Weber for a complete list of all names of artists and binders working in this art form, including the contemporary artists.

One of the largest collections of the U.S., with 258 rare fore-edge paintings, is in the Boston Public Library. Another great collection, the Estelle Doheny Collection, is displayed in the Edward Laurence Doheny Memorial Library at St. John’s Seminary, Camarillo, California.